The main idea of this post is to describe on how to integrate YouTrack Issue Tracking System by Jetbrains (www.jetbrains.com/youtrack/) with TestLink v1.9 (http://www.teamst.org/) a popular Test Case Management Tool.

By the time of writing this article, the official wiki of YouTrack : http://confluence.jetbrains.net/display/YTHB/Integration+with+TestLink was last updated on Mar 30, 2011. The data it contained was invalid for TestLink v1.9.

So here are the steps,

Keheliya Gallaba has created a nice addon which we be can use to view Non Unicode Text in their Unicode equivalents.

It now supports 'Auto-Detect Language' feature and has translation support for more than 40 languages.

I tried entering "subha aluth awuruddak wewa" and below is the output. 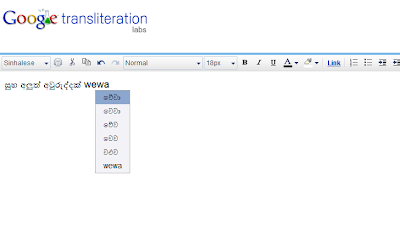 By checking this service I found out that it does more work than Traditional  Phonetic Transliteration.

It has some prediction (AI) capabilities so that in most times it will show the intended word we needed.
I tried the same input with some other similar services and the output was not accurate like in Google Transliterate.

Recently I had a requirement of calling some functions in a C++ DLL file which i created, via C#. I achieved it by using PInvoke.

The advantage of using PInvoke in my case is that, C++ DLLs compiled to machine Language runs much faster than compiled to CLR.

How to use PInvoke – Basics


Now recompile the program as a DLL and we are ready to call this function from C#.


So in your C# Application, first include

Then add below line in the class file.

After that you can call that function just like calling any C# function.
Eg: int i = getValue('a');

Let's assume that you have a C++ function which returns a structure. And you need to get the returned C++ structure from the C# code. Here is how you should do it.


In the C++ code, the structure should look like this.

And assume that the C++ function (which returns the structure) looks like below,

So in the C# code, it should look like,

And our own C# struct Type  - MyLocation, to which we bind the returned data, should look like below.

Then you can call the C++ methid in C# like,

After a long time


I was not able to update my blog for the past 10 months.

But stay tuned because there will be frequent blog posts from now on ...
Posted by Jinath Sanjitha at 12:37 PM 1 comment: